On 17th February, 2021, the BEATS project team met remotely for the 2nd Annual Meeting, hosted by the ESRF, Grenoble, France. 35 participants from the BEATS member institutes joined the half-day event, which combined presentations from the work packages interspersed by lively discussion sessions. The meeting marks the half-way point in the project, due for completion end 2022.

Patricia Postigo-McLaughlin, project officer for BEATS at the European Commission (EC), together with Mirjam van Daalen, chairwoman of the BEATS Steering Committee, welcomed the participants and opened the meeting.

Adriana Wawrzyniak, head of the Accelerator Division at SOLARIS, chaired the first session, dedicated to a review of the “soft” work packages.

Axel Kaprolat, project coordinator, gave a brief overview of the activities and achievements in 2020 then continued with a report on the global status of the project in terms of deliverables, time-line, budget and communication activities.

After explaining how BEATS had adapted to and coped with the perturbations caused by the COVID pandemic, he reported how the project had confronted a difficult phase following the external technical review by the European Commission in June 2020. The technical design is almost complete and now lies ahead the manufacture and procurement of major beamline components. Concerning other actions for the coming year, he added “BEATS will also strive to expand and consolidate the BEATS/SESAME user community and will focus efforts on long-term sustainability in the form of funding opportunities and stewardship models. The project is fully up to expectations with all due deliverables having been accepted by the EC. BEATS is on track to face the upcoming challenges.”

Next, Kirsi Lorentz, vice-chair of the Steering Committee and tasked with user community building within WP 2, gave an overview of activities to date and the focus of activities to come. As well as continued actions to build up the user community through regional dedicated events, WP 2 will also be concentrating on industry-targeted marketing and training activities (e-learning) for future users. These efforts, which involve individual tailored approaches, are labour intensive and will be re-evaluated. Kirsi Lorentz presented a revised strategy adapted to the conditions caused by the pandemic.  Frank Lehner, work package leader, reported on the remaining tasks of WP 2 including the establishment of a Purchasing Advisory Board, staff training in all aspects of beamline operation and establishing the concepts for the long-term sustainability of BEATS.

Andrea Lausi, SESAME Scientific Director and leader of WP 5 gave a status update of procurement at SESAME. All major calls for tender will be finalised with contracts placed end March 2021. He reported on the first civil works that had started inside SESAME to make room for the new beamline.

Andrea Ghigo, leader of WP 3, and Susanna Guiducci, gave a status update on the construction  of the x-ray source and related activities. The characterisation of the magnetic structure will be conducted at the site of manufacture before shipping the device to SESAME.

Gianluca Iori, BEATS beamline scientist, reported on the progress within WP 4, explaining the overall technical design of the beamline (from front end to the experimental station) and the radiation protection calculations. He addressed in detail the ongoing design of the experimental station (sample environment, sample stage, and detector stage) which is carried out with the help of Fortune Mokoena (ESRF trainee from the University of Johannesburg).  Concerning the overall timeline of the project, Gianluca explained that due to delays with the procurement of the X-ray source, the radiation tests of the optics and experimental hutch will very likely be around three months late. 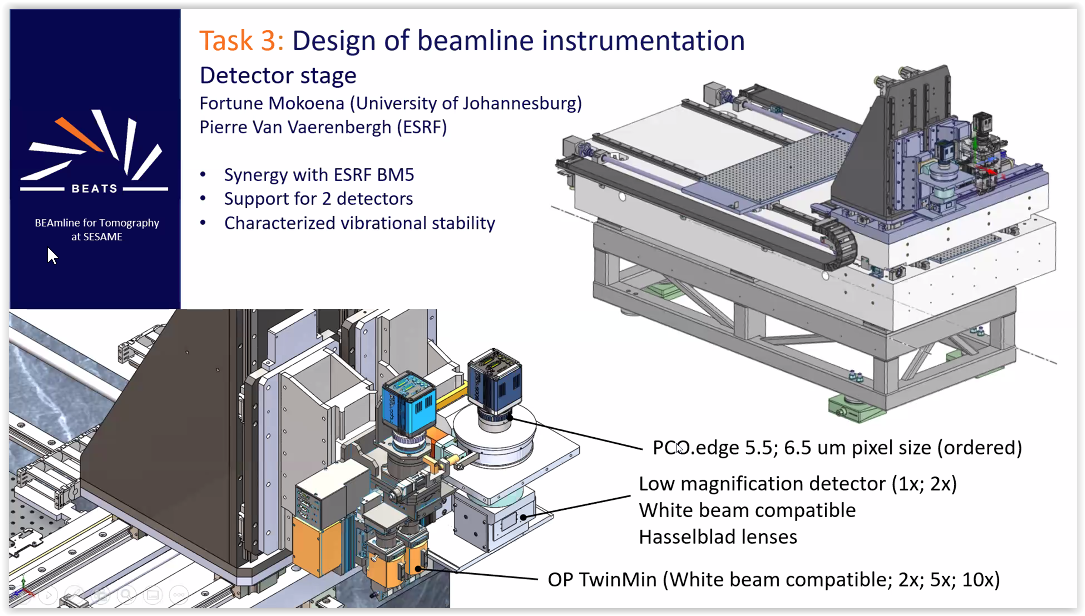 Charalambos Chrysostomou, leader of WP 7, covered the progress on the IT environment, data analysis and management. The work package contributed to the establishment of the SESAME Data Policy which was submitted and approved by SESAME’s Council in summer 2020. He then explained  in detail the proposed IT infrastructure, both the image acquisition chain as well as the mid- and long-term data storage concepts. Procurement will begin soon, following the in-depth analysis of suitable suppliers. Later in 2021, WP 7 will concentrate on the tomography software applications and efforts to establish data analysis as a service.

Prior to the wrap-up session, Patricia Postigo-McLaughlin reported on some forthcoming organisation changes within the European Commission. She stated that “BEATS is a great project, a lovely endeavour. It is a prime example of how humans can come together, work together, to help other people explore the world.”

In his wrap-up remarks, Michael Krisch, who contributed considerably to the establishment of the BEATS grant application and served until recently as ESRF’s representative in the BEATS Steering Committee, thanked the EC for their frank interaction and feedback over the first two years of the project. He added, “Our collaboration with the EC is a good example of colleagues working together and of people who respect each other. There is a lot of hope to deliver the promises of BEATS and the project is a great example of how science should stay open and remain unaffected by politics, religion or gender. I have no doubt that the beamline will deliver cutting-edge science for the region.” He then encouraged the whole BEATS community to join their expertise to investigate opportunities to help SESAME to secure long-term stability based on its own funding scheme, and he proposed measures to this effect.

To conclude, Mirjam van Daalen said she was “very impressed by how the project is gaining momentum and progressing well”. She thanked all the participants and actors in the BEATS project, especially the coordinator for keeping everyone on track and motivating the different teams to keep moving forward.

Coordinated by the ESRF, the European Synchrotron, the BEATS project will design, procure, construct and commission a beamline for hard X-ray full-field tomography at the SESAME synchrotron in Jordan. It involves leading research facilities in the Middle East (SESAME and the Cyprus Institute), and European synchrotron radiation facilities ALBA-CELLS (Spain), DESY (Germany), Elettra (Italy), INFN (Italy), PSI (Switzerland), SESAME (Jordan) and SOLARIS (Poland). The initiative is funded by the European Union’s Horizon 2020 research and innovation programme.