From 27-29 June, the BEATS Scientific Case Workshop brought together more than 40 participants from across the world. The Workshop was hosted by the Cyprus Institute in Nicosi, Cyprus, with the aim of presenting and discussing the science applications of the first tomography beamline in the Middle East.

The European Union Horizon 2020 funded project BEATS, which is to be one of SESAME’s seven Phase 1 beamlines, launched in January 2019 with the finality of designing and building a tomography beamline at the SESAME synchrotron in Jordan. The project spans a four-year period with delivery and first users expected in 2022. The European Union grant is worth six million euros.

The Workshop was officially opened by Rolf Heuer, President of the SESAME Council.

Reflecting the genetic make-up of SESAME, the participants and speakers at the workshop originated from the Middle East and Europe including Jordan, Cyprus, Iran, Egypt, Pakistan, Israel, Italy, France, Switzerland, Germany and the UK. 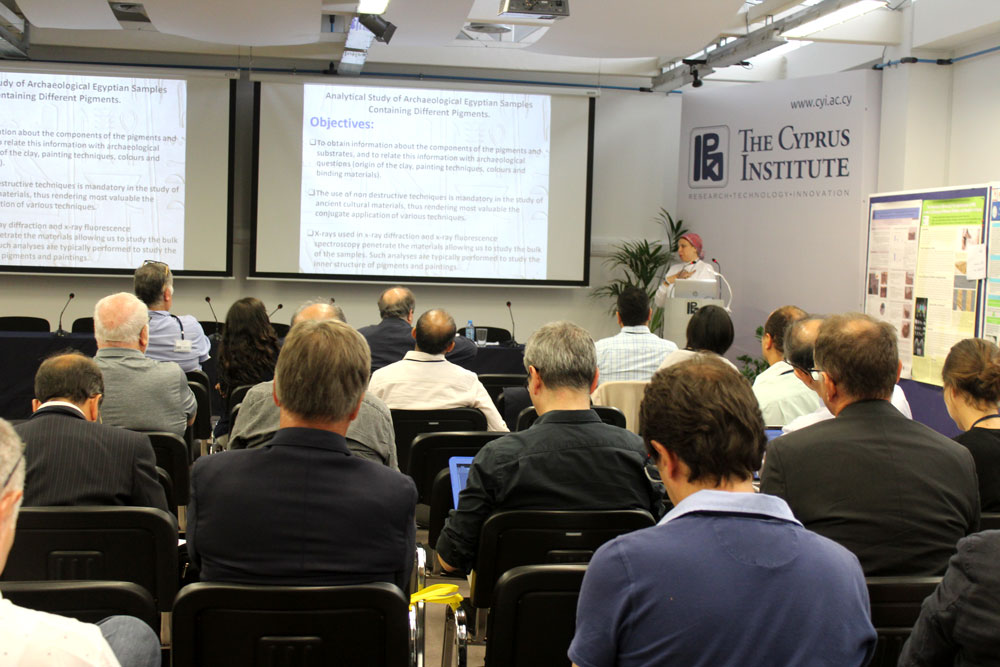 N. A. Ali during her talk entitled "Investigation of pigments layer on wooden coffins from the old kingdom of the Egyptian cultural heritage". ©CyI

The two-day programme covered the vast range of research domains that can benefit from synchrotron X-ray tomography including keynote, grounding and regional talks in archaeology and cultural heritage, health and biology, materials science, engineering and nano-science applications and big data.

For Esen E. Alp, Senior Physicist at Argonne National Lab, and Chairman of the SESAME Science Advisory Committee, “The scope and the scientific depth presented in the BEATS Workshop at the Cyprus Institute  was impressive. X-ray tomography has a lot to offer. Perhaps, the most impressive aspect of the workshop was the quality of the presentations, and identification and recognition of issues relevant to the region. One can easily see that the BEATS initiative was timely and the scope is appropriate.”

Through in-depth discussions on the applications, the participants and future users of the facility aimed to steer the design of the tomography beamline to tailor it to the specific needs of research groups from the region.

Andria Hadjipaanteli Doolan, from the University of Cyprus Medical School was interested in a tomography beamline closer to home. “This beamline will provide increased accuracy for my results through higher resolution and beam monochromaticity. I met many interesting people at the workshop with openings for future collaborations and further projects.”

Eva Seknazi, workshop participant from Technion, the Israel Institute of Technology, said: “My impression from the workshop is that BEATS has already managed to gather a community eager to work on the beamline and to collaborate. I think everyone here is convinced that great science will be carried out at BEATS.”