Pipes and UHV – how to keep our wiggles on track

The vacuum tube of a synchrotron storage ring, no matter how big or small, is a complex machine made up of hundreds of components, all of which have to be precision aligned to ensure that the narrow electron beam can circulate over several tens or hundreds of metres without perturbations. To achieve this, the electrons circulate in an ultra-high vacuum environment inside special chambers. This UHV environment ensures that the electrons do not collide with gas particles, which could cause beam loss, unwanted bremsstrahlung radiation, and equipment damage.

When magnetic fields force the electrons to change direction, they generate synchrotron radiation covering the spectral region from the infrared up to high energy  X-rays. Either this happens when they travel through bending magnets (ensuring the quasi circular closed orbit) or special magnet structures – wigglers or undulators – installed in the so-called straight sections1. These structures force the electrons to follow a wiggly path and, in doing so, they greatly (largely?) enhance the intensity of the radiation generated and sent to the experimental stations.

At SESAME, a three-pole wiggler, installed in a short straight section of the storage ring, will generate the X-rays for the tomography beamline BEATS (read our article: https://beats-sesame.eu/the-optimal-source-for-beats/). 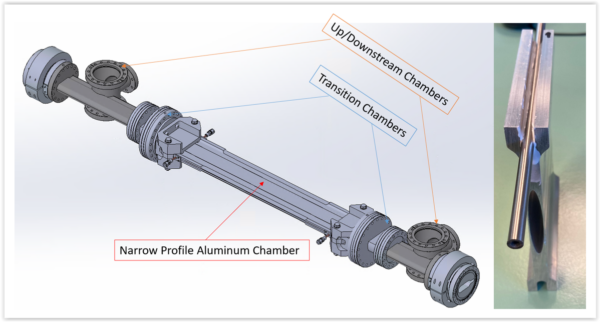 The vacuum assembly consists of different chamber profiles - round, flat and elliptic.

To satisfy this constraint, an assembly of special vacuum chambers had to be designed and manufactured: the flat centre chamber (made of aluminium), adjacent chambers, allowing for the installation of vacuum pumps and additional chambers (called tapers, made of stainless steel), that gradually change profile from round to elliptic.

The design of these tapers is important so to avoid the generation of wake fields. Wake fields are caused by a change in geometry of the vacuum chambers and they can act back on the beam and lead to instabilities.

The European Synchrotron (ESRF) supplied the flat central part of the chamber assembly, which was modified to include water cooling and adjacent chambers. To improve the level of vacuum inside the chamber, the inside was coated with NEG at the ESRF’s coating facility. NEG, or non-evaporable getter, acts as a vacuum pump once it is activated at high temperature inside the chamber.

BEATS will have two such assemblies, one will act as a spare, the other will be installed in the SESAME storage ring during the machine shutdown end of August.

During this shutdown, different components of the BEATS beamline including the front-end and 3-pole wiggler, will as well be installed inside the SESAME storage ring, on schedule for the beamline commissioning expected end 2022. Keep abreast of our progress on Twitter (https://twitter.com/BEATSeu1). #BEATSisReal!